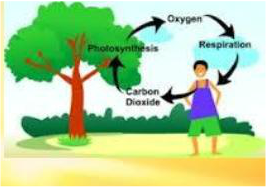 A Carbon and Oxygen Cycle is how a person and a plant react together. 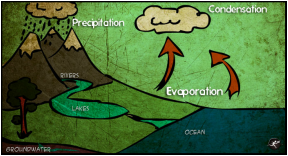 Definition of The Water Cycle
The cycle of processes by which water circulates between the
earth's oceans, atmosphere, and land, involving precipitation
as rain and snow, drainage in streams and rivers, and return
to the atmosphere by evaporation and transpiration.

Steps To The Water Cycle
Evaporation

Definition-The process by which molecules of liquid water absorb energy and change into the gas state.

The Process- When water evaporates from earths surface and forms vapor, a gas in the atmosphere.

Definition- Rain, snow, sleet, and hail that falls to the ground

The Process- By which water vapor is changed back into liquid water. Then, water becomes precipitation, which is water falling from the clouds as rain, freezing rain, sleet, snow, or hail.


Definition-The process by which a gas changes to a liquid.

The process-Water that collects as droplets on a cold surface when humid air is in contact with it.


Benefits to The ﻿Ecosystem﻿

All ecosystems need water to survive. Oceans, lakes,streams, and plants provide the water to evaporate into a gas to the clouds which turn the gas back into a liquid when rain, snow, sleet, and hail fall from the clouds to ecosystems giving them a key materials to survive.

What is photosynthesis?
Photosynthesis is the chemical process in which green plants create their own food using the sun, water and carbon dioxide to create a type of sugar called glucose. During this process the plant will give off oxygen as a by product.


What Are the Benefits?
Plants produce most of the oxygen that we live off of, and at the same time they are producing a sugar that they need to grow. So when the plants are full grown they can help us even more because they produce more oxygen and can give us food.


How does it Work?
Green plants absorb light energy from the sun using a green pigment in their leaves called chlorophyll. They then use it to react carbon dioxide with water which in turn, creates glucose. Once the glucose is created, it is used in respiration, or converted into starch and stored inside the plant for further use.

1.   Carbon Dioxide: An odorless, colorless gas that is an essential material for photosynthesis. It helps the plant create the glucose that it needs to grow.


3.   Glucose: A type of sugar that is created by photosynthesis. It is also known as D-glucose, Dextrose, and/or Grape Sugar.